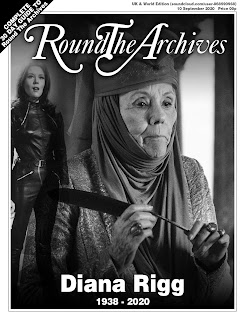 ‘Where Steed jumps the gun and Emma gains her wings’

Where on earth do, I begin?

That’s where I will start.

In the late 1970s and early 80s my mother became the housekeeper for the local gentry in their manor house and I would often be roped into helping with the washing up at larger dinner parties. As a 12 year old it was a way of earning a little extra pocket money.

We often had the guests popping their heads into the kitchen to say hello. Government Ministers, titled socialites, actors such as Jonathan Cecil and my favourite Diana Rigg (she wasn’t a Dame then).

Diana and my Mum would swap recipes whilst I sat listening to her exciting stories of exotic international travel and generally piddling about on the stage. I remember once having a food fight with her whilst she tried to recite some sonnets. Every time she dried, I would launch a spoonful of Spag Bol at her, as she would throw bread sticks at me. We giggled like school kids as my mother made us clear up the mess in the kitchen.

At school I had learnt the cheeky verse ‘The boy stood on the burning deck eating red hot scallops, one fell drown his trousers and burnt him on the……………………………knee.’

I fired this off with full theatrical flourish. Diana roared with laughter and replied with ‘Mary had a little lamb, her father shot it dead. And now Mary takes her lamb to school, between two hunks of bread’.

I still have a number of her ‘Mary had a little lamb’ verses I use today; all are very witty, and some are very blue but all are courtesy of Diana Rigg.

I only knew her as James Bond’s wife from ‘OHMSS’ at that time. At the age of 12, Shakespeare was a bit out of my league, however Diana did get me into reading sonnets.

She was always smiling, always hugging and kissing when we met and always took an interest in what I was doing. Today I suppose we would call her a Luvvie, but upon reflection I found her honest, sincere and thoroughly cheeky.

How many people can say Emma Peel taught them to swear!

I discovered 'The Avengers' when it was repeated on Channel 4 and asked her about it once. She replied ‘I laughed from start to finish, but it paid the bills and got me known. In my line of work, you always needed a stage to launch from’.

To many she was an icon of the 1960s, to others she was the girl who went from comic book hero to a board-treading stalwart, that iconic professional who never failed to deliver an audience-slaying performance.

Even now you can see her on Channel 5’s remake of ‘All Creatures Great and Small’ as Mrs Pumphrey. - working right up to the final curtain.

I have tried not to create a chronological list of her full and varied career. In fact it's not even a surface scratcher. If you want to learn more, type her name into your search engine or into YouTube and investigate what is a full life in the limelight alongside the greats of the stage and silver screen.

Diana Rigg was a true powerhouse of an actor, a legendary name within the acting community and a true professional. But to me she will be that wonderfully witty soul who threw bread sticks at me and taught me to say ‘bugger’ a lot and more colourful descriptive words.

A star in the night sky has not just gone out, we’ve lost an entire constellation tonight. 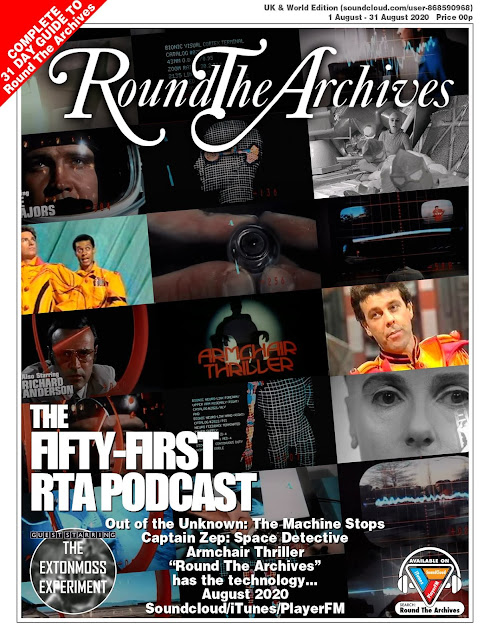 Episode 51 now available!
Episode 51 of 'Round The Archives' sees us welcome back Simon and Ken from 'The ExtonMoss Experiment' podcast as they take a look at the 'Out Of The Unknown' story 'The Machine Stops'.
Martin has the technology to examine in detail the title sequence for 'The Six Million Dollar Man', then Nick and Paul talk about the first season of 'Armchair Thriller'.
Finally, we stay alert to cast an quizzical eye over the colourful adventures of 'Captain Zep - Space Detective'.
That's all in Episode 51 of 'Round The Archives' starring Lisa Parker, Andrew Trowbridge, Simon Exton, Ken Moss, Martin Holmes, Nick Goodman and Paul Chandler.
You can listen to Episode 51 of the 'Round The Archives' podcast on Soundcloud here.
(Written by Andrew Trowbridge)
- August 17, 2020 No comments:

The Making Of 'Round The Archives' 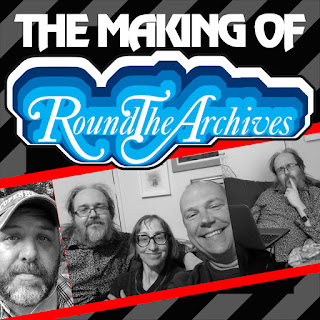 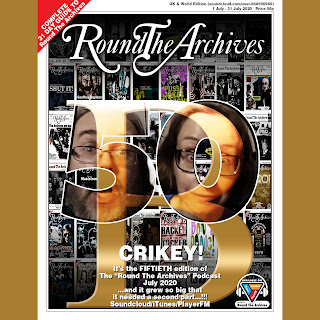 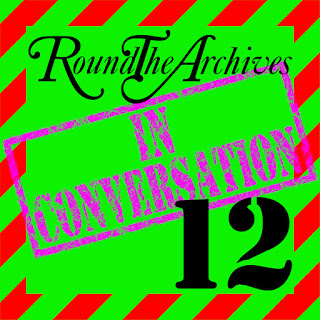 RTA In Conversation - Episode 12
"Death by Space Pirates!"
Formats galore as the 'Round The Archives' crew gather to discuss black-and-white telly versus colour, 525- and 625-lines, VHS, DVD, picture quality in general and the more unlikely dangers one might face when watching 'The Space Pirates' Episode Two...
Featuring Paul Chandler, Nick Goodman, Martin Holmes and Andrew Trowbridge.
Music by Dan Tate and Paul Chandler.
Cover art and editing by Martin Holmes.
You can listen to Episode 12 of 'Round The Archives In Conversation' on Soundcloud here.
(Written by Andrew Trowbridge)
- July 17, 2020 No comments: 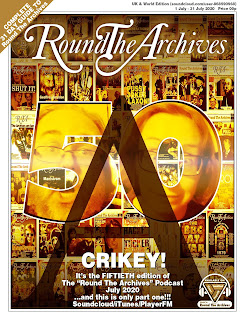 Episode 50A now available!
Episode 50A sees us starting our Golden Anniversary celebrations with a '50 Episode' quiz provided by Ben.
Andy P stays with the golden theme as he takes at look at the 1983 BBC serial 'The Cleopatras' written by Philip Mackie and produced by Guy Slater.
Next we travel 'Up Pompeii' to hang out with Frankie Howerd as Lurcio, forever failing to finish the Prologue, then Martin looks at the 1970 'Softly, Softly : Task Force' story 'Open And Shut' by Allan Prior.
Finally Ben returns to remember the rubber world of 'Spitting Image' without even sticking a deck chair up his nose.
That's all in Episode 50A of 'Round The Archives' starring Lisa Parker, Andrew Trowbridge, Ben Baker, Andy Priestner and Martin Holmes.
Episode 50 will continue with Episode 50B which will be along in due course...
You can listen to Episode 50A of 'Round The Archives' on Soundcloud here.
(Written by Andrew Trowbridge)
- July 06, 2020 No comments: 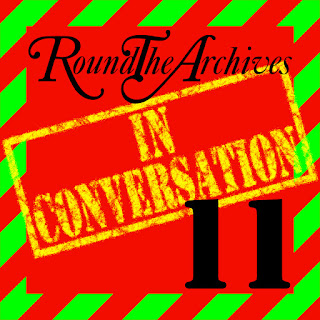 RTA In Conversation - Episode 11
"Dropping coffee on my laptop..."
Special guest Andy P joins us along with Martin & Paul to discuss 'An A To Z Of UK TV Drama' and 'The Shy Life Podcast', giving us some behind-the-scenes insight into the making of their shows.
Featuring Paul Chandler, Martin Holmes, Andy Priestner and Andrew Trowbridge.
Music by Dan Tate and Paul Chandler.
Cover art and editing by Martin Holmes.
You can listen to 'Round The Archives In Conversation' Episode 11 on Soundcloud here.
(Written by Andrew Trowbridge)
- June 29, 2020 No comments:

A tribute to Diana Rigg ‘Where Steed jumps the gun and Emma gains her wings’ Where on earth do, I begin? Spaghetti Bolognese, the deliciou...